This post is part of a virtual book tour organized by Goddess Fish Promotions. David Pereda will be awarding a $25 Amazon or Barnes and Noble GC to a randomly drawn winner via rafflecopter during the tour. Click on the tour banner to see the other stops on the tour. 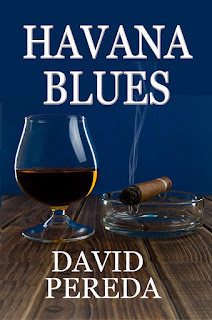 The year is 1952 and Ramon Rodriguez’s life as a teenager in fun-loving Havana is filled with typical activities and concerns: girls, education, religion, baseball, parties, and hanging out with friends. The country is enjoying a period of prosperity and happiness--until General Batista stages a coup that topples the government and Ramon’s life is flung into chaos.

As Ramon experiences the thrills of his first romantic relationship, graduates from school, and struggles to plan for an uncertain future, he is forced to make important decisions that may be dangerous to him, his family, his friends, and his girlfriend – the beautiful Sonia -- and could turn deadly.

Black Face chomped on his cigar, eyeing Pepe with deliberation. He was big and muscular and mean-looking. Pepe looked frail next to him. ‘Go home, muchacho.’ He finally said. ‘Now. Before you get in trouble.’

‘Is the president really dead?’ I asked. ‘Is it true?’

The fat policeman laughed in my face. He had rotten teeth and bad breath too. He winked at Black Face. ‘Hey, Valdez, did you hear that? This boy wants to know if the president’s dead. How do you like that?’

The black policeman laughed too, as if what Puffy Face had said was the funniest thing in the world, his burly body shaking all over. He coughed, and tears came to his eyes.

The two policemen laughed some more, but not so hard.

Their laughter was running out of steam. Maybe they were getting tired. I realized, suddenly, how scared I really was of them – my heart was pounding hard and my breath was coming in shallow little gasps. It was time to leave. Who cared if the president was dead or not, anyway? We could find that out later.

‘Is he dead?’ Pepe asked again.

‘You sure ask a lot of questions,’ Puffy Face replied with annoyance. ‘No, he ain’t, cabron. Bastard ran away. Scared.’

‘Cabron yourself,’ Pepe said under his breath. ‘Fat ass!’

‘What was that you said?’ Perez scowled at Pepe.

‘Nada, Señor Policia. Nothing!’ Hermes said, walking rapidly toward the other side of the street. ‘He didn’t say nothing.’

Perez watched us with his frog eyes as Joaquin and I struggled to take Pepe away. Black Face chewed on his cigar stump.

‘What these little bastards need is work,’ Perez said. ‘Trabajo.’

‘Trabajo, si.’ Valdez took the cigar out of his mouth and spat again. ‘Put them to work in the sun ten hours a day with a pick and a shovel. That’s what they need. I guarantee you they won’t be so sassy then.’

‘Si,’ Perez said. ‘That’s what they need.’ He laughed. ‘And palos. Una buena partida de palos. Beat the shit out of them with a stick.’

As if to emphasize his words, Perez hit the façade of the school building hard with the butt of his machine gun. ‘And here’s where they learn all that mierda. Right here!’ He banged the wall again. ‘From the curas and their goddamned Catholic schools.’

‘That’s the problem with Cuba, the goddamned curas,’ Valdez said. ‘Fucking priests stick their noses into everything. All they do is create trouble. Look at these kids, asking questions. No respect for authority. Wanting to know who’s the new president.’

‘Si, what the fuck do they care who’s the new president? That’s the fault of the curas,’ Perez said, adding so softly I had to strain to hear him as we rambled away, ‘School and curas. Never liked them and never will.’

Unexpectedly, Black Face screamed something at us. The jumbled words reached my ears with the force of a slapping wind as we hurried down the street. For a moment, I couldn’t comprehend what he was saying and then, finally, I did.

‘It’s Batista, cabrones. You hear me? Batista! That’s the name of your new president. And he’s black too. Like me.’

David Pereda was born in Havana, Cuba. The award-winning author of seven previous novels, he enjoys crafting political thrillers and edgy mainstream novels with unique characters placed in exotic settings. He has traveled to more than thirty countries and speaks four languages. Before devoting his time solely to writing and teaching, David had a successful international consulting career with global giant Booz Allen Hamilton, where he worked with the governments of Mexico, Venezuela, Peru and Qatar, among others.

A member of MENSA, David earned his MBA from Pepperdine University in California. He earned bachelor degrees in English literature and mathematics at the University of South Florida in Tampa.

He lives in artistic Asheville, North Carolina, with his youngest daughter Sophia, where he teaches mathematics and English at the Asheville-Buncombe Community College. He loves sports and is an accomplished competitor in track and show-jumping equestrian events.