Behind Picket Fences
by Hend Hegazi 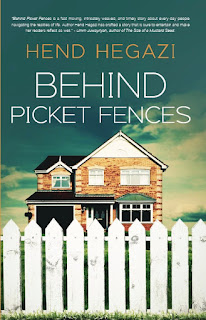 Behind Picket Fences exposes four families from behind their comfortable lifestyles and smiling faces. Sharing the same neighborhood, even spending time together, no family knows the truth about the difficulties the others face.
On the outside, Sidra and Farris have the biggest house and the most expensive cars. What no one sees is their struggle to accept an unfulfilled dream. If they do not adapt to the blows of fate, their malcontent may give birth to deception.

Mariam and Morgan’s modest home exudes the rich scent of family. With children playing in the yard, they seem picture perfect. But financial struggle is their continuous battle, and their only solution may produce an envy which is more destructive than hunger.

Summer and Porter enjoy youth and the freedom of self-employment. But discontentment and mental instability linger between them. If they are not able to bridge the gap, their search for happiness may have a fatal end.

May and Hasan enjoy peace and true happiness. Illness cares not, however, of letting them relish in their blessings. Only patience and time will prove if this unwelcome visitor is simply passing by, or if it will tear their world apart.
An honest portrayal of love and family, Behind Picket Fences opens our eyes to the difficult truths hidden behind each happy facade.

At half past six she began to get worried, but told herself to give him fifteen more minutes. “His will be the next car around the turn,” she assured herself. But the passing of more than a few cars and fifteen minutes made her unable to wait any longer. She dialed his number once, with no answer. She hung up and dialed again immediately. The second time, there was an answer.

The words Summer had been ready to speak got lodged in her throat and she stood there, barely breathing.

“Hello?” the voice repeated, a little louder this time.

Summer’s hand began to shake and a moment later she let the phone drop from her weak fingers. Her breathing became labored and she raised her hand to her chest to soothe the jabbing, but the pain would not cease. Rather, it spread from her heart and ran all through her body. Her legs suddenly became too weak to hold her and she fell seated to the floor.

What a cruel way to tell me, Porter, she thought as the tears streamed down her face. So cruel.

The guilt in her told her she deserved it. She had deceived him in the worst way possible and broken his heart; why wouldn’t he seek comfort in the arms of someone else?

But then why had he agreed to dinner? Simply to get revenge? To make me feel the pain that I had put him through? Really? Why did I let myself get my hopes up? Why did I think he could forgive me? Why did I not expect him to turn to another woman? All the questions ran through her mind as her heavy breathing turned to sobs and she cradled herself, rocking back and forth. Porter had just shattered the last bit of hope she had been clinging to, and broken any remaining pieces of her heart.

The tears flowed for what felt like hours. When they finally stopped, she stood up feeling drained and jaded. Summer cleaned up the kitchen, her body unable to move at its usual pace. She threw the food directly into the garbage instead of putting it away in the fridge; she wanted no reminders of the evening she had expected to have. Carefully, she walked to her bedroom and stepped out of her dress and into a pair of sweat pants and a tank top. Pulling her hair into a tight pony tail, she turned off all the lights in the house, and paused just outside the bathroom. The medicine cabinet seemed to whisper her name.


Love being able to escape from my reality to another.  This book takes you through four families and what they deal with.  This is a fantastic book that's well thought out and very well written!  Each page will diffidently have you glued wanting more and needing to know what will happen next.  Highly recommend!

Hend Hegazi was born and raised in Southeastern Massachusetts. Despite her desire to pursue writing as a profession, she graduated from Smith College with a degree in biology and a minor in religion. Shortly thereafter, the winds of life and love blew her to Egypt where she has been living for the past 14 years. She is a full time mother of four as well as a freelance writer and editor. Some of her work has been featured in SISTERS Magazine. Her fiction and poetry focus on the human condition, often shedding light on the Muslim American experience. Hend strives to be God-conscious and aims to raise that awareness in her readers. As a common theme in her pieces, the intimate relationship between God-consciousness and love is often explored. Hend’s debut novel, Normal Calm, was published in January 2014.

You can read her poetry and blog posts on her website, www.hendhegazi.com, and follow her on Facebook at www.facebook.com/AuthorHendHegazi. For updates on giveaways and special offers, kindly opt-in to her free newsletter at this link http://eepurl.com/bZa7fH.

Both of her novels are available through most major book distributors, or click here to purchase through Amazon: Normal Calm, Behind Picket Fences.