LIGHT IN MY DARK & Giveaway

Light in My Dark
by Jean Gilbert and William Dresden 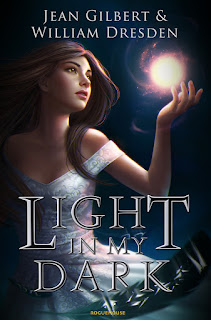 Sixteen-year-old Harper Deveraux has longed for an adventure ever since her mother died of cancer four years ago. Much to her dismay, she is stuck in Glen Eden, a small mountain town in upstate New York that does little to fuel her hopes and dreams.

Another year of high school has begun, and with the Moon Dance only a few weeks away, Harper suddenly finds herself torn between the affections of two boys: her best friend Jack, and a new boy from the City named Knes who might not be from this world.

Strange things begin to happen in Glen Eden when Harper uncovers a mystery that involved her mother and a realm shrouded in darkness that lies beyond the wall... A realm that Knes intends to take her to. Only Jack stands in his way.

Light In My Dark, is an action-packed modern YA fantasy, filled with dark forces, love, and self-discovery.

With an arm out front as a shield, Jack pressed through the unnatural pitch-black, swiping back the grasping monsters. Up ahead, there was a change in the darkness, a lightening of sorts. The nightmarish dread clung to him as he fought to reach the break ahead.

And then he was through.

All around him was a world of twilight. Gone was the crisp autumn air of Glen Eden. Instead, the air weighed on his body, thick like that of a humid summer day.

"Harper?" he called out as he scanned the half-light of the night.

It appeared to be evening, dusk, or just after.

Nervously, he walked forward, stumbling a little as his sneakers caught on the flat stone platform in front of the shadowed wall he had just come through. At the end of the platform, there was a set of steps that led down into a grassy glade that was surrounded by a thick hedge of tall shrubs. Two great shadowy figures flanked the steps like ghostly statues of some ancient cemetery. He could not see their faces, for they were turned away from the wall.

"Harper? Are you there?" he called out again.

When no one answered, he crept forward and down the steps, eyeing the stone statues as he passed between them. The air became heavier, making him nervous, but he kept going.

William Dresden is an author and award-winning screenwriting. He spent several years as a script doctor and pursued the dream of writing hollywood blockbusters. Now he mostly writes fiction and enjoys spending time with his family and friends. William currently lives in Virginia with his wife and two children.

Jean Gilbert is an award winning speculative fiction writer from New Zealand. She is a Core member of SpecFicNZ, and is also the coordinator for SpecFicNZ Central. Jean's novels include the Vault Agency Series: Shifters, Ardus, and The Vault. You can find her short stories Blonde Obsession in Baby Teeth: Bite Size Tales of Terror, and Pride in the Contact Light Anthology.