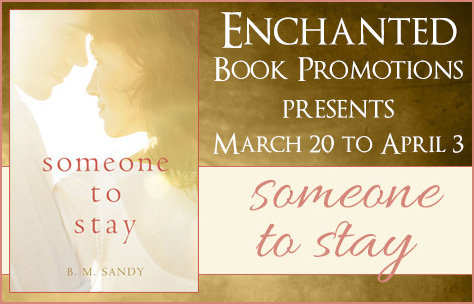 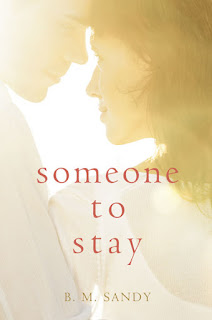 About the Book
Title: Someone To Stay
Author: B.M. Sandy
Genre: New Adult Romance
Life is short – this Cassie Mills knows. In the wake of a devastating loss, she has reshaped her life, carving out a limited place for herself with her grief-narrowed perception of the world. But when Jake Mason, an elusive yet famous British actor, comes to her small Pennsylvania town with an entire movie crew to film for two months, she is asked to cater to him and his colleagues in the hotel restaurant where she works. After a strange, but memorable meeting, she tells herself she’ll never see the kind and handsome man up close again. The very next night, though, he shows up again for dinner, and the spotlight is on Cassie again.
Jake Mason’s career is flooded with endless Do Not Disturb signs. He’s notorious for hiding during shoots; nobody seems to really know him. He’s worked hard for his career, and he accepted a long time ago that privacy was a valuable commodity that he should never relinquish. Accepting a leading role in a film that places him in a small town in Pennsylvania, he is forced his first night there to attend a private dinner with nineteen of his fellow cast and crew – definitely outside of his comfort zone. But after losing his phone, he finds himself intrigued by the waitress who helps him, and begins to wonder if some sacrifices might be worth making after all. Author Bio
B. M. Sandy lives in Youngstown, Ohio with her husband and her one-eyed cat child, Maia. She’s a lover of books, film, and all things imaginary. Someone to Stay is her first published novel.