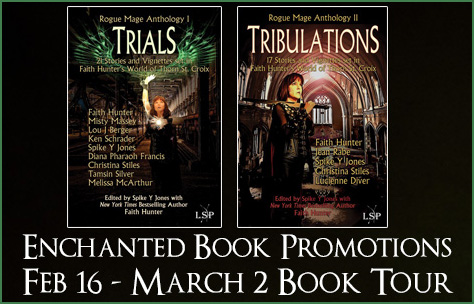 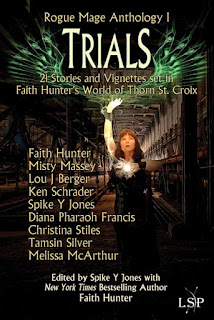 The Rogue Mage world began long ago, when the epic battle between the High Host and the Darkness was won and lost. TRIALS takes fans of Thorn St. Croix into the past, before the opening pages of BLOODRING. These stories, set in Faith Hunter's Rogue Mage world, are adventures with new characters and old, facing dangers unimaginable. And they must save the world all over again.

If you ever wondered what happened between seraphs, kylen, second-unforeseen, mages, seraph-touched, spawn, humans, dragons, and their creatures before the series, now is your chance to delve deeper and wider. TRIALS features new short stories from nine authors—including Faith Hunter—and vignettes from the Rogue Mage role playing game.

TRIALS will be followed soon by TRIBULATIONS, and then by the omnibus TRIUMPHANT. 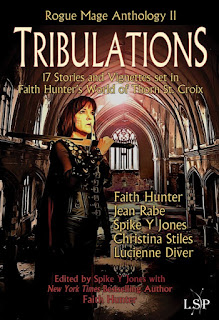 The Rogue Mage story began with the post-apocalyptic novels BLOODRING, SERAPHS, and HOST, when epic battles between Thorn St. Croix and the forces of Darkness were fought. TRIBULATIONS (Rogue Mage Anthology Vol. II) takes place during and after the series timeline. These stories and vignettes, set in Faith Hunter's Rogue Mage world, are adventures with new characters and old, facing Darkness and an uncertain future.

TRIALS and TRIBULATIONS will soon be followed by TRIUMPHANT—the paperback omnibus (both Anthology Volumes I and II in a bound format).

Unbidden Bonds
by Faith Hunter
(late Winter 105 PA/2117 AD)
Kicking the snow from his boots, Zadok took a calming breath and faced the small house, trying to project the confidence of a seasoned healer, rather than the fear of an acolyte on his first solo cure. His smile was stiff on his frozen face, the air so cold and still that his flesh felt brittle, as if it would crack and fall from his bones should he move wrong.
The short trip had been brutal, his contingent of six guides and fighters more accustomed to the vicious cold and hard pace than a mage who had lived his entire life in the comfort and ease of the Seattle Enclave. He’d gained an appreciation for the humans who lived in the frozen wastes, losing his snide sense of superiority, which had been based solely on his mage abilities. He never would have survived the short trip without the assistance of the others.
He glanced at the human woman, Sarai. She’d saved his life when he’d stepped off the track and crashed through the snow into the creek beneath. The driving snow had already drained Zadok's mage energies dangerously low, forcing him to draw constantly on his prime amulet to fight it, and he'd lost precious body heat to the icy water. Not even his amulets could fight off hypothermia. While Howard, a mule, started a fire, Sarai had activated all of his Healing amulets, stripping him down and crawling into a sleeping bag with him… naked… sharing her body warmth with him… offering him her life energies.
He’d accepted the gift of her life, stealing the energies of a human in ways no Earth mage was permitted. Now she smiled at him, encouragement in her glance, seemingly hinting that some bond still lingered between them. Zadok nodded once at her and opened the door of the fortified building.
Stepping inside the thick stone walls, he took in the dwelling with a sweeping glance. Perhaps twenty humans were gathered around a huge fireplace in the large room. Except for a table before the fire, the furniture had been shoved against the plastered walls. On the table was a blanket-covered form, a body racked by shivers. The gathered humans looked up, fear and stress grooving their faces. Zadok took a second calming breath and the stench of rotting flesh, old urine, and feces met him. Fear threaded through him, knotting his muscles, causing him to pant. Am I too late?
He gulped, frozen on the threshold. Gently, Sarai pushed him into the room and closed the door behind them, leaving the others to set up perimeters. As if she were his servant, she took the satchel from his numb fingers and whispered, “You can do this. I have faith in you.” Louder, she said, “The healer Zadok has arrived from Seattle Enclave to work an incantation of healing on your kirk elder, Judith. He requires a surface for his implements, a cup of warming chai, and space to work.” Within moments, the humans had helped him from his winter gear, brought him hot chai laced with brandy, placed a table before him for his mage amulets, and eased the body from the tabletop to the floor, creating a space wide enough for him to work a healing circle.
Posted by Stormy Nights Reviewing & Bloggin' at Monday, February 20, 2017