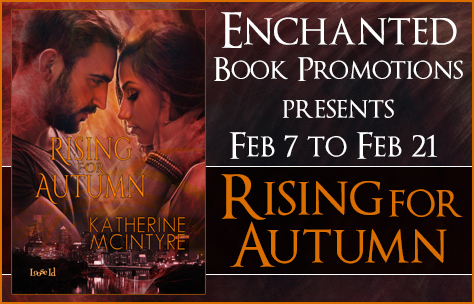 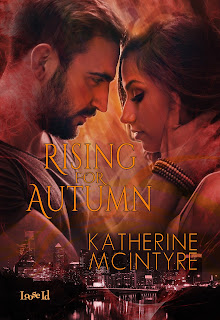 Title: Rising for Autumn
Author: Katherine McIntyre
Genre: Paranormal Romance
Crisis and danger have become second nature for Alanna Carrington—after all, as the boss of the Philadelphia Coven, she’s responsible for upholding the laws amongst the supernatural. Which means when the Order of the Serpent rears its ugly head, this time with the most powerful necromancer this city’s ever seen, she’s the one person who can keep Philly safe. Ex-Order djinn and now ally, Samuel Karim happens to be the best suited guy to help. Except he’s also the first man who’s stoked her interest in far too long, and ever since she commandeered the lamp he’s tethered to for safekeeping, he also hates her guts.

As the Order gathers the necromancers of her city and sparks a dangerous alliance, she finds herself working with Samuel Karim more and more. Hatred burns to passion, and when he exhibits a strength and compassion that breaks through her ironclad defenses, she finds herself falling deeper despite the complications between them. Yet with her city under siege and their lives on the line, the sharp desire between them erupts into the temptation to break their own rules, before the Order of the Serpent robs them of the chance permanently.


Author Bio
A modern day Renaissance-woman, Katherine McIntyre has learned soapmaking, beer brewing, tea blending, and most recently roasting coffee. Most of which make sure she’s hydrated and bathed while she spends the rest of her time writing. With a desire to travel and more imagination than she knows what to do with, all the stories jumping around in her head led to the logical route of jotting them down on paper. She writes novels with snarky women, ragtag crews, and guys with bad attitudes. High chances for a passionate speech thrown into the mix.

Her mouth opened, and the urge to taste her overwhelmed his senses. Attraction this strong hadn’t pulsed through him for far too long, no matter how he tried to suppress those feelings. She didn’t look away either, her eyes searching as if she were looking for some sort of answer in him. His fingertips pressed into the cold countertop while he restrained himself from crossing the inches between them. The woman dealt with enough turmoil in one night.


Her brows drew together, and her eyes got a glint of determination to them. Before he could react, she took the step and leaned up to press her lips to his.


The spark flaring between them burned bright hot, and his movements turned fluid like the water he controlled. He deepened the kiss, sliding his tongue in to taste her, and one hand slid along the slope of her waist. With his other hand, he buried his fingers in her thick, silken hair, unable to get enough of the smooth sensation. Her lips were soft as sin, her mouth sweet as honey, and she melted into his arms like she belonged there. The flare of heat in his chest as she leaned into him smoldered with intensity.


His grip around her hip tightened when he pushed her against the counter, and her hand looped around his neck, her palm pressing against his skin like a brand. Drunk on the taste of her, he dove for more, claiming her lips with a surprising possessiveness to his movements. A soft moan escaped her as he braced his palms on the counter on either side of her while his chest pressed against her lush breasts. The air in the room grew thick, heavy, and the layers between them were too much. He breathed in the lavender that reminded him of the stubborn witch and dipped down to kiss her again.