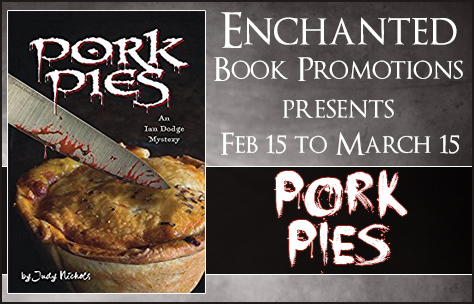 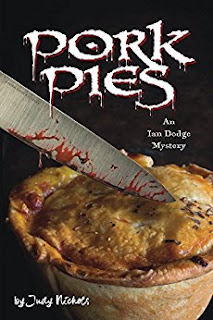 About the Book
Title: Pork Pies
Author: Judy Nichols
Genre: Cozy Mystery
Crusty British transplant Ian Dodge is back on the beat, this time in the service of Her Majesty,
otherwise known as Laura Lane, the Food Queen, star of a popular TV cooking show. A
blackmailer has threatened to expose her sordid past as a con artist, so she turns to Ian Dodge
to get it sorted.

When her blackmailer is found stabbed to death in his hotel room, Her Majesty is the prime
suspect. It’s Ian’s job to untangle a web of deception and pork pies (lies) to find the real culprit,
all the while dealing with the antics of his twin sons, Jesse and Mac. 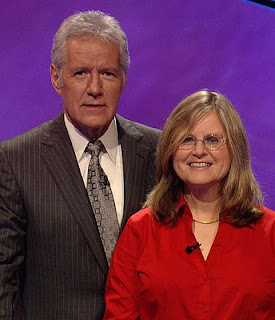 
Judy Nichols grew up in a Batavia, Ohio a small town twenty miles east of Cincinnati and eventually found herself living in Aurora, Indiana, a small town twenty miles west of Cincinnati. She would be there still if GE Aircraft hadn't made her husband Nigel an offer he couldn't refuse-- a chance to live near the ocean with GE footing the bill for moving expenses.
So now she lives in Wilmington, North Carolina.
She started her novel Caviar Dreams while her daughter was napping one day. Five years later it was finished. The biggest challenge arrived once her daughter stopped taking naps and eventually lost interest in watching the “Toy Story” video.
Judy holds a bachelor's degree in journalism from Kent State University. She has been a newspaper reporter, a teacher, a temporary office worker, a customer service representative, and currently stay-at-home mom with way too much time on her hands. (And never mind that her daughter has graduated from college and lives in San Diego).
In April of 2012, Judy achieved her lifelong goal of appearing on the quiz show “Jeopardy!” She was a two day champion winning a total of $46,500 and the distinction of being officially named the smartest person in a room full of very smart people.
She has earned only two awards in her lifetime. Neither of them has anything to do with writing, but she is immensely proud of them nonetheless. Adia Temporary Agency presented her with the "Temp of the Month" award for March, 1987 and The Ohio Chapter of The Nature Conservancy gave her a Volunteer Appreciation Award in 1991.
Her experience with The Nature Conservancy inspired her second novel Tree Huggers, about a single mom reporter covering the deadly clash between an unscrupulous developer and a militant environmentalists, published in 2008 She followed it up with a sequel in 2014 called The Reason for the Season.
Her latest book Pork Pies is the latest in her Ian Dodge mystery series. Ian is a British national, living in a small town in rural North Carolina and stubbornly hanging on to every shred of his Britishness. Any resemblance to Ian Dodge and her own prickly British husband is purely intentional. Other books in the series are Sportsman’s Bet and Trouble and Strife.
Currently, Judy is a volunteer with Phoenix Hometown Hires, a non profit group that helps people find meaningful work.