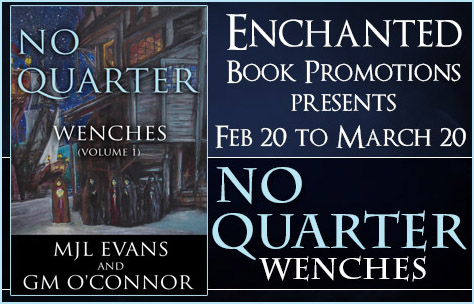 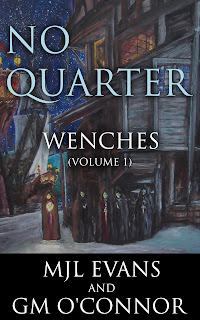 About the Book
Title: No Quarter: Wenches – Volume 1
Author: MJL Evans
Genre: Historical Romance
Volume 1 of 6 begins in 1689 Port Royal, Jamaica, where Atia Crisp is imprisoned, awaiting trial, while refugees from Strangewayes's plantation seek their new home. Guided by Capitaine la Roche, they face pursuit by the pirate hunter Big Dick and the perilous terrain of Bocas del Toro. Their future home of Sérénité hangs in the balance, complicated by the outbreak of war with France.
Series Description:

The adventures from No Quarter: Dominium continue with wenches! In 1689, Atia Crisp finds herself imprisoned in the wickedest city on earth, Port Royal, Jamaica, while the refugees from Strangewayes’s plantation in the Blue Mountains are on the run and seeking a new home, deep in the Caribbean. Captain Jean-Paul la Roche must get them to safety and find a way to liberate the woman he loves while waging a war against the English with the pirate Laurens de Graaf.

While besieged people suffer and starve, a group of women form a secret and illegal society deep from within the bowels of the city called: WENCH. A network that deals with smugglers, merchants, cutthroats and thieves. Dragged into the struggle for supremacy of the Caribbean, the women are divided and find themselves engulfed in bloodshed. The pirates of Port Royal and former enemies may be their only hope of escape. 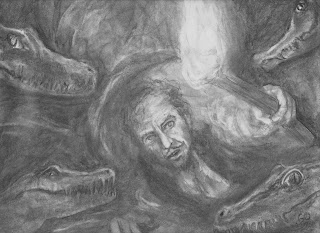 Author Bio
MJL EVANS wanted to be a writer since she was ten years old and in 2014 she finally got her act together and pursued her dream. No Quarter: Dominium (Volumes 1-6) is her first book series. She is currently writing the No Quarter: Wenches book series, which is a continuation of the adventures in 17th century Port Royal, Jamaica. A huge fan of Monty Python, Red Dwarf, Game of Thrones and The Walking Dead. Her time is devoted to acrylic, oil and watercolor painting, catering to her two senior cats and of course, writing.
You can connect with MJL Evans on Twitter at @artistmjlevans or noquarterseries@gmail.com

GM O’CONNOR is a huge movie fan, writer and visual artist. No Quarter: Dominium (Volumes 1-6) is his first book series and he’s currently writing No Quarter: Wenches. A lover of sci-fi and history, half his brain lives in the 17th century while the other half sails perpetually through space. He hopes to one day bring the No Quarter Series to film and/or graphic novel format.
You can connect with GM O’Connor on Twitter at @gm_oconnor or noquarterseries@gmail.com

Excerpt
Atia stared coldly at all the self-righteous bastards. The last she’d seen of her da and uncle was when they sailed away on Lucky Charms. It was after they helped her escape from Crisp’s slaver captain, Mandingo, and also the pirate Slasher Al. She had waved almost cheerfully; unaware it was the final goodbye. “You’ll not go from me sight, only from me view,” her da had told her before they parted ways. Now her da was dead and Uncle Rourke too. She prayed to all the gods that her brothers were safe. They had been sent to Aragua on an errand.
Atia eyed a guard’s belt, where a dagger gleamed. The shackles weighed heavy on her limbs, but she had just enough leeway.
“Atia Crisp, you are charged with associating with a known pirate, mischief—” Goblet stopped.
Atia grabbed the weapon and plunged it into the guard’s neck. He screamed and flailed his arms, trying to shake her off. Blood jetted everywhere, saturating her dress.
“Order!” Goblet demanded and pointed at the remaining guards, who were staring in shock. “Well, stop her!”
Blower and a guard tackled Atia. Her face was slammed onto the wet floor. The blade slipped from her hand. She was then forced to her feet with a guard on each side of her.
Goblet jotted down an additional note. “You can add murder to your list of charges.”
“Uh, he’s not dead,” a guard said.
Goblet crossed it out and rewrote the line. “Fine. For attempted murder, you are so charged.”
The bleeding guard released a final gasp.
“Oh, he died,” Blower said.
Goblet was about to cross out what he’d written again.
“You’re sure?”
“Aye, he’s dead.”
“And murder,” Goblet continued. “Have you anything to say for yourself before I have you locked in the dungeon as a dangerous offender?”
An evil grin formed on Atia’s lips. “I’m a dangerous offender now, Da. Yer little girl’s all grown up!”
“Take her away and lock her up. Lock the rest of them up for interrogation,” Goblet ordered.
“Me Capitaine’s coming back for me. He’s comin’ for his dangerous offender,” Atia cackled.
“We’ll see how a month in the dark agrees with your tongue.” Goblet smacked the mallet again. “Court is adjourned.”