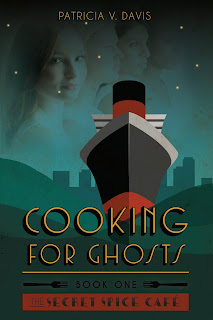 A Vegas cocktail waitress. An Indian herbalist. A British chemistry professor. An Italian-American widow. Four unique women with one thing in common: each is haunted by a tragedy from her past. The women are surrounded by ghosts long before they step aboard, but once they do...

Excerpt:
Somewhere in the Atlantic, 1949

In an ocean as dark and still as death, the Queen floated. The scythe-shaped moon engulfed in mist gave off only a dank tinge of light. Waves skimmed lazily along the Queen’s sides, like the careless caress of an indifferent lover. She was only fifteen years old, but she’d already witnessed so much misery: war, love lost to tragedy, and once, a vile murder that had left a stain on her no sea she traveled had ever washed away.
Now she was about to witness another. The killer’s rage was silent and patient. And yet, she could feel it. In desperation, the Queen willed her fog horn to blow…

Under the cover of the dimly lit stairwell on the deserted sports deck, the sailor waited. He’d timed it well. The watch wouldn’t make his rounds up here until after it was over.
Long before he could see his prey, he heard the click of her heels on the planked wood, echoing off the water as she approached. He pressed himself back further into the darkness as she came into view, her eyes focused on what he’d stolen to lure her, carefully placed so that it would be visible to her while he remained hidden. As she bent to pick it up, he stepped swiftly behind her and clamped his forearm around her throat, cutting off her scream and her breath as he pulled her into the shadows.
She felt her windpipe close up and the blood rush to her head. She couldn’t twist around to face him, but ─ oh, God ─ she knew who he was. How ironic. In a life as mousy as the color of her hair, the one impetuous thing she’d dared do, would end her. As dreary as her life had been, she didn’t want it to be over.
So she struggled. She dug her nails into Death’s rigid forearm and clawed at the skin on his elbow. But he only swore at the blood she’d managed to draw and kept that arm hooked resolutely under her chin, dangling her legs up off the deck, pressing even tighter against her throat as she kicked. He shook her and she felt the cool night air hit the sole of her foot as one of her shoes fell off. The thump it made against the deck startled him. He lost his vice hold on her for an instant and she tried again to scream. He slammed his other hand across her nose and mouth. With a rush of stinging pain, the salty iron taste of blood filled her mouth, mingled with the smell of his familiar aftershave. Who’d have thought Death would come wearing Old Spice? He’d groomed himself as carefully for her murder as he once had for her seduction. She went queasy with the realization that his arms were not the only part of his body that felt rigid against her.
But mere seconds later, she was too lightheaded to feel disgust or even fear. She now lay in his arms, compliant, his hand still pressed against her bloodied mouth and nose. Her head was tipped back as he continued to suffocate her and she could see the night sky, a depthless backdrop for the stars that flickered through the gauzy veil of ocean fog. And the moon looked like a grin. Lovers walking the decks below must think it all so romantic. Dimly, she could hear the band playing in the ballroom. She was amazed she could even recognize the tune ─ a new one, just come out that year:
“Some enchanted evening, you may meet a stranger…”
Her final act was to pray that he wouldn’t dump her before she was truly dead. As cruel as his arms were, at least they were warm. She didn’t want the ice cold water to be the last thing she felt. 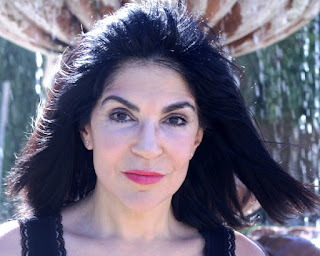 Patricia V. Davis is the author of the bestselling Harlot's Sauce: A Memoir of Food, Family, Love, Loss and Greece, and The Diva Doctrine: 16 Universal Principles Every Woman Needs to Know. Her latest work, "Cooking for Ghosts: Book I in The Secret Spice Cafe Trilogy" first of three novels set aboard the RMS Queen Mary, is due to be released in October 2016. Despite the diversity of Patricia's writing projects, they share the universal theme of "female dynamism," a term she's coined which signifies women taking positive action to support each other and better the world around them. To that end, Patricia also founded The Women’s PowerStrategy™ Conference: http://womenspowerstrategyconference.com/