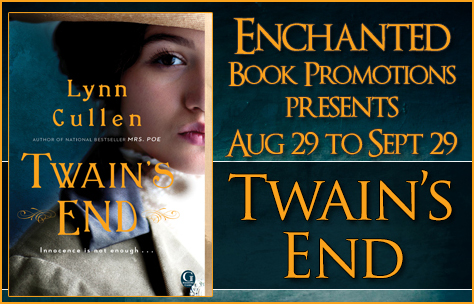 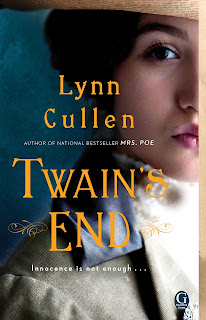 About the Book
Title: Twain’s End
Author: Lynn Cullen
Genre: Historical
Now in paperback for the first time from the national bestselling author of Mrs. Poe, Lynn Cullen, comes TWAIN’S END (Gallery Books; June 7, 2016; Trade Paperback; $16.00), a fictional imagining of America’s iconic writer Mark Twain and the woman who knew him too well.
In March of 1909, Mark Twain cheerfully blessed the wedding of his private secretary, Isabel V. Lyon, and his business manager, Ralph Ashcroft. One month later, he fired both, wrote a ferocious 429-page rant about the pair, and then—with his daughter, Clara Clemens—slandered Isabel in the newspapers, erasing her nearly seven years of devoted service to their family.
In TWAIN’S END, Lynn Cullen “cleverly spins a mysterious, dark, tale” (Booklist) about the tangled relationship between Twain and Lyon. A silenced woman, Isabel’s loyal service and innocence were not enough to combat the slander, and she has gone down in history as the villainess who swindled Twain in his final years. She never rebutted Twain’s claims, never spoke badly of the man she called “The King,” and kept her silence until she died in 1958. How did Lyon go from being the beloved secretary who ran Twain’s life to a woman he was determined to destroy? TWAIN’S END explains.

Lynn Cullen lives in Atlanta surrounded by her large family, and like Mark Twain, enjoys being bossed around by cats. Follow Lynn Cullen on Facebook or visit www.lynncullen.com.