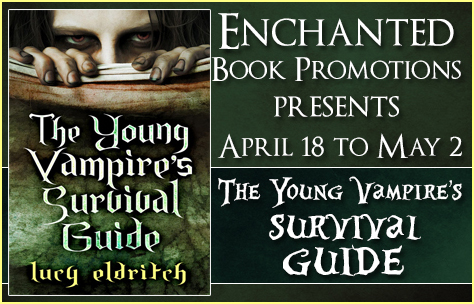 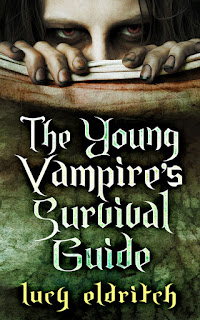 About the Book
Title: Young Vampire’s Survival Guide
Author: Lucy Eldritch
Genre: Vampires / Urban Paranormal / Horror
Within a month of being bitten, it cost the life of Robert James’ best friend. Within a year, hundreds had died. All because of him.
Until Robert was bitten, he was a regular college student. Now he seems to be the reluctant future of vampire kind and his world has been turned upside down. Pursued by the Dawn Warriors – a group dedicated to cleansing the world of evil – Robert’s survival is at stake. Literally.

Author Bio
I’m Lucy Eldritch and I write paranormal-horror-urban-fantasy-vampire fiction set mainly in Manchester (the one in the UK, not the one in New Hampshire) and London. I also love red wine, but I suspect that’s not really something I should mention. Not professional. Something like that. So, consider it un-mentioned.
You can find me here:
http://www.vampirebookseries.com
https://twitter.com/lucyeldritch.com
And buy the books here:
Kobo: https://store.kobobooks.com/en-us/ebook/the-young-vampire-s-survival-guide
Amazon: http://www.amazon.com/dp/B01DL2DP96/
iBooks: https://itunes.apple.com/us/book/id1098001903
Nook: http://www.barnesandnoble.com/w/the-young-vampires-survival-guide-lucy-eldritch/1123610817?ean=2940153180762


A second year political thought tutorial. Social Sciences Building, University of Manchester.
Two weeks passed since I read the note and I'd fed just once. I didn't want to think about it so, unusually for me, I was focused on the subject: Thomas Hobbes 'Leviathan'. I'd even read the book: twice. Well, I didn't need to sleep anymore; what else was there to do?
"Hobbes is wrong," I caught myself saying.
"A social contract is neither social nor a contract if it is promised under duress. The idea that the threat of violence does not undermine the freedom with which ones make an agreement is not something that stands up under close scrutiny. Furthermore..."
I pushed my hand through my long, thick black hair and paused. It was a gesture I frequently used for dramatic effect. This time, though, I was suddenly aware of a weird stillness in Professor Worthington's tiny, over-hot study.
Every one of the six students, as well as the Professor herself, looked at me like I was something they had never seen before. Like I was some kind of Messiah figure, dispensing wisdom from on high. They were transfixed. Enraptured. Silent. I wasn't sure how I'd done this but I was certain that my criticism of a rather dull 17th Century political philosopher wasn't the reason.
There was a glazed look in my tutor's eyes I had never seen before. In anyone. I was sure that if, at that moment, I asked her to strip down to her underwear, and twerk like Miley Cyrus while singing the chorus of Marilyn Manson's 'Cake and Sodomy' she would have done. Willingly. Well, willingly by Hobbes' definition, if nothing else.
I closed my eyes and allowed my mind to reach out to each of the room's other occupants. Touching their souls, one by one I brought them back to normality. They glanced around, briefly puzzled, but otherwise it was as if nothing had happened.
This wasn't the 'glamour' I'd read about in vampire fiction. This was something quite different. I named it 'Rapture'. I needed to make a note.
I pulled my phone out of my pocket to do just that when Professor Jane Worthington spoke.
"Ah, Mr James," she said, "you were doing so well for a minute."
She sighed, sad and weary, and nodded in the direction of my phone.
"But, I see you have already returned to your old ways. Put your phone back whence you found it and I'll explain to you, and the rest of the group, why your understanding of Hobbes' argument is flawed."
Posted by Stormy Nights Reviewing & Bloggin' at Monday, April 18, 2016