Child of War - A God is Born & Giveaway 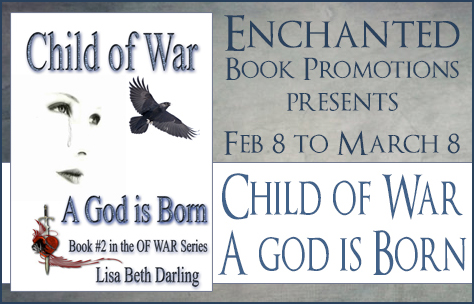 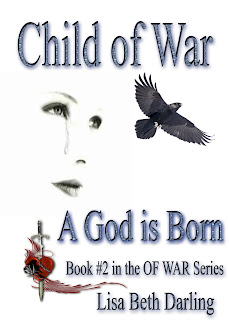 About the Book
Title: Child of War – A God is Born
Author: Lisa Beth Darling
Genre: Adult Paranormal / Mythological Contemporary
Do you remember Damien? Raven makes that kid look like an angel.

In book #2 of the OF WAR Series, Ares settles down with his wife, Alena, to await the birth of their son, Raven. As Alena struggles to enjoy what should be a blessed event, prophetic visions of an adult Raven haunt her dreams. Are they true visions or false ones implanted by Cernunnos who told her the boy would bring glory to Ares but only pain and agony to her? The strong but delicate Fey is relentlessly bombarded by hostility from the Olympians making her yearn to be back on Ares’ secluded island home, far away from all the bickering and backstabbing that makes up Life on mighty Mount Olympus.

Before Raven is even born, Zeus outwardly despises him for his Fey blood given to him by his filthy Celtic mother. With no way out and no way to keep his family safe from his father, Zeus the God of Gods, Ares enters into a blood pact that could cost the God of War everything he holds dear.

After a harrowing birth wherein mother and son are nearly lost to Ares, it quickly becomes clear that Raven may be the most powerful and cunning Olympian ever born despite his muddled bloodline.

As Zeus, Apollo, and Aphrodite plot against the new family by carefully planting the seeds of rage and doubt in Raven’s mind, they turn son against mother. It appears as though Alena’s visions and Cernunnos’ prophecy are coming to life as Raven grows to be a very angry young man.

As the true past between the Olympians and Celts is revealed, the battle for Ravens’ mind and the ultimate control of Olympus begins. Before it’s over, the white snows of Olympus will run red with blood. 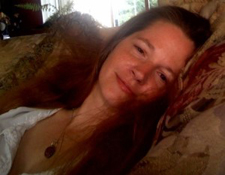 It was in the 4th grade when Lisa Beth Darling discovered she was a naturally gifted writer. For her very first creative writing assignment, the teacher asked the class to pen a story about a baby bird's first flight and read them to the class. Putting pencil to paper, Lisa was instantly whisked away by a force she couldn't explain. When they were finished, all of the children read their happy stories to the class. Not Lisa. She got up and told of how the baby bird flew too high, hit a plane, crashed to the ground and died. She told of how the mama bird and daddy bird cried of how even God was upset sending the rains pouring from the sky. The class was speechless when she finished all they could do was stare at her. The teacher kept her after class told her the story was very good but it was different from the others. She asked Lisa if she'd ever heard of Icarus and had she based her story on him. Lisa had yet to encounter Greek Mythology or hear a whisper of Icarus. As Lisa left the classroom the teacher again told her how good the story was but suggested she might want to write something happier next time. Perplexed, Lisa turned and asked her teacher: "Why?" The teacher had no answer. Luckily for us, Lisa never took that teacher's advice.
Today she brings us complex multi-layered stories rich with the trials and tribulations that make up the world in which we live. Not one to be pigeonholed into any single genre, Lisa's stories revolve around the intricacies of couples from range the intimacy of lovers, to mothers and sons, and brothers and sisters.
Lisa Beth Darling is 49 years-old, lives in her hometown of New London, CT with her husband of nearly 30 years, Roy. She is the author of more than fifteen novels along with several short stories and non-fiction books.