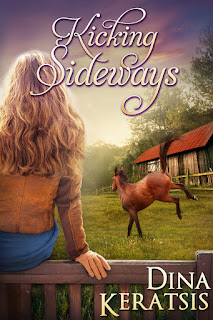 Lucretia “Cree” Cabot spends her time saving everybody else to avoid facing her own haunted life. Between raising her younger brother and trying to open a women’s shelter, Cree has built an impenetrable wall around her heart. But when a tenant for Cliff Cottage appears at her door, he cracks her vigilantly controlled world, forcing her to look within to confront the emptiness inside.

Mike Sullivan, famous superhero artist, is searching for a peaceful summer break and a new perspective on life. A farm in sunny Santa Cruz seems like just the place. Looking to escape from his usual routine, he doesn’t count on falling for a woman who is as stubborn as the mule that lives in her barn. Yet beneath Cree’s prickly exterior, he finds a woman in pain—a woman with an immense capacity for love. Mike knows she is the only one for him, but will Cree find the courage to truly live and love before the best thing to walk into her life leaves her behind?

Sundown hovered in the sky and was reflected in the surf, a great smearing of lime and fuchsia and orange sun. Mike and Cree stood on the Boardwalk and leaned over the railing to view the beach and pier as they ate hot dogs and sipped Cokes.

Tourist families trickled from the dusk-ridden amusement park while teenagers and college kids filled it. Down on the beach, couples strolled at the edge of the surf. A man jogged with his dog. Behind them, the carousel bellowed its macabre tones and Cree shivered.

She hated the merry-go-round. To her, the ride promised an escape to magical and faraway places but as soon as you bought a ticket, you found that you had been duped, all hopes dashed in a never-ending circle of ups and downs, dreams frozen in the mouths of screaming horses.

So she turned her back on the beach and let the white and colored lights of the Boardwalk dazzle her until she could tune out the strains of the calliope. Mike, she snorted, no doubt loved the awful contraption. She looked at him and shook her head. He was staring at the monstrous thing with a half smile on his lips and a dreamy look in his eyes.

He was right about coming here, she thought, as she tossed her napkins in the basket. She inhaled the salt air and sweet smell of cotton candy and felt light and free.

She felt young again, on the brink of promise, as if she were here with her girlfriends, giggling at the thrill of night and hoping that the hot guy from gym class would notice her. Only this time, she was here with an even hotter guy. She stood up a little straighter, let her step swagger a bit as she began to walk.
~~~~~~~~~~~~~
**SPOILER FREE**


Nice read... well written easy to follow.  It's not one of those that bounce back and forth.  It was smooth right from the start.  The past stays in the past and walls are not to be broken down.. But once you pick this book up you'll find out if that stay the situation or not.  This author has a lot of skill and her book shows it!

Dina Keratsis is an award-winning author of romance fiction in which all roads lead to illumination and magic is found in the mundane. A New England girl, she has a penchant for punk rock, Scottish tea rooms and a mad crush on Sirius Black. She lives in Massachusetts with her husband and two children.