Peace, Love, and a Dead Hippie Chick
by N.R. Leigh 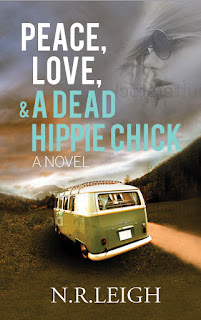 Peace, Love, and a Dead Hippie Chick follows the intertwining journeys of three young women in the mid-1990s who go on the road and off the grid, and leave their worlds behind. Each woman falls into a dangerous subculture of sex, drugs, and rock and roll in an attempt to attain her own sense of peace, love, and freedom.

KARA, a middle-class Midwestern girl, flees her painful past after a tragic accident claims a loved one, only to learn—after a violent attack—that there’s no safety among friends or strangers. Survival rests in her hands alone as she escapes into the wilderness of New Mexico.

NATASHA, born into privilege, rebels against her family’s expectations as she follows the Grateful Dead concert tour circuit, selling contraband and exploring her sexual freedom.

AMY, an impoverished Southern belle, becomes love-struck when an exotic drifter passes through town, deciding to leave home and follow him.

This intricately interwoven coming-of-age tale delves into the connection between strangers and the premise that the grand orchestration of life goes well beyond chance.

Daddy put a silver spoon in my mouth, and I yanked it out.

Those were his words, not mine, when I called my parents to tell them that Ian and I had returned to the States. A heresy for someone whose first love is money, I know. So, I stood to correct him.

“Yes, I yanked it out, but I sold it on the street for twice its value—to be exact.”

He didn’t appreciate my wit.

“I see nothing but disaster in your actions, Natasha. You’ve had your fun. Now it’s time to come home.” His voice was stern and steady.

That’s the point when I usually hang up the phone, but we hadn’t spoken since December, when I called to wish them a “Happy Hanukah.” Shortly thereafter, Ian and I flew down to Costa Rica during the break between fall and winter Grateful Dead shows.

“Your mother is worried sick. She’s taken out another life insurance policy on you. At this point, you’re worth more to her dead than alive.” He was whispering—Mom must have been hovering. She is an insurance agent, and most of her customers are Daddy’s clients.

“We’ve phoned most of the police municipalities on the West Coast and asked them to keep an eye out for you. Since you are twenty years old, they’ve said there is nothing they can do. It’s an embarrassment for us… and a waste of my hard work. If you come home immediately, we will get you your own condo in Boston. We’ll give you whatever money you need to travel. You will have plenty of breaks during semesters. I’ve already spoken to the Dean, and he said we’ll call this whole mess a sabbatical.”


Amazing how this book was put together with the different lives.  And to be taken back into a better time than today's.. wonderfully, well thought out, amazing story!  Lots of twist and turns that will keep you turning page after page!

N.R. Leigh began her writing career in 2007 as a featured columnist for the guerrilla newspaper The Uncommon Sense. She since has written books as an expert on personal health and wellness under the pseudonym Nicci Leigh.

She was inspired to write her debut novel, Peace, Love, and a Dead Hippie Chick, by a conversation with a friend, who described a newspaper article regarding the events that surrounded a group of hippies’s visit to her small town and the havoc they caused. This crazy, fascinating account, coupled with N.R.’s experiences traveling the United States in her early 20s, gave birth to her story.

N.R. has a background in education and teaches aesthetics, yoga, Reiki, and related holistic modalities. Born and raised in Flint, Michigan, she currently lives in a rural coastal community in southwest Florida with her family and their Australian Kelpie, Sydney, who believes she’s a Tasmainian Devil.

N.R is inspired by funny people and those who create positive change and peace. Her friends and family describe her as driven, strong, silly, and independent. Something most people don’t know about her is that, at age eighteen, she aided police in the capture of a team of bank robbers.

N.R. is working on her first fiction series, Imagine Yasmin.