Girl of Myth and Legend & Giveaway 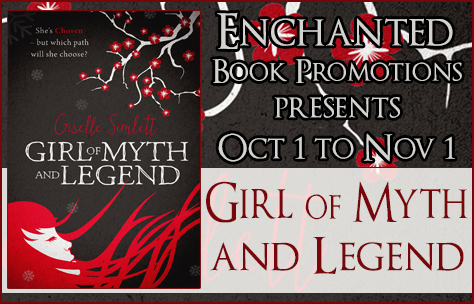 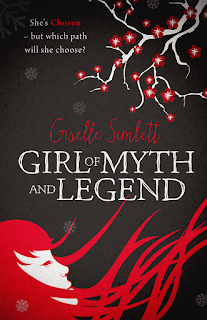 About the Book
Title: Girl of Myth and Legend
Author: Giselle Simlett
Genre: Fantasy / Romance
A girl with a past she tries to forget, and a future she can’t even imagine.
Leonie Woodville wants to live an unremarkable life. She wants routine, she wants repetition, she wants predictability. So when she explodes in a blaze of light one morning on the way to her college, it’s enough to put a real crimp in her day.
And things only get weirder…
Leonie learns from her father that she is last of the Pulsar, a phenomenally powerful member of a magical species called the Chosen. It will be her sole duty to protect the Imperium, a governing hierarchy, from all enemies, and to exceed the reputation of the Pulsar before her. So – no pressure there, then.
Leonie is swept away from her rigorous normality and taken to a world of magic. There, she is forced into a ceremony to join her soul to a guardian, Korren, who is both incredibly handsome and intensely troubled, a relationship for which ‘it’s complicated’ just really doesn’t cut it.
But Leonie is soon to learn that this ancient world is no paradise. With violent dissidents intent to overthrow the Imperium, and dark entities with their own agenda, she and Korren find themselves caught in a war where they will have to overcome their differences if they are to survive.
Dare to dream. Dare to hope. Dare to be a legend.
Book One in The Chosen Saga.

Author Bio
Giselle Simlett was born and raised in England. She has studied Creative Writing at both Gloucestershire University and the Open University. She has a diploma in Creative Writing, Language and Literature and will soon complete her BA Hons Open Degree.
She does not as yet have a degree in the power and responsible use of magic, but she does have a young son, which amounts to the same thing. She currently lives in Australia with her husband and son.
Website: http://www.gisellesimlett.com/

LEONIE POV, but Korren's dialogue.
1) His bronze eyes, which had become distant, now focus on me, and in them blazes such contempt that I shiver. It’s like he’s talking to more than just me, to all of those masters, all of those cruel and unkind keepers over the years who he once believed were his friends. ‘You say immortality isn’t a burden and you may think it a wonderful, divine thing; maybe it is for those who have freedom. But if all your days are kept within this cage, with no way to escape, how can you call that living?’
His fists clench. ‘You say that you want to believe there is more to this world than just death. Well, look at it; it’s in front of you. I am more than death. I am the result of immortality. Don’t you think we want our suffering to be for something, that we want this endless pain to have some meaning at the end of it? We hope just as much as any individual, as any mortal. But there is a difference: we know now that there is no explanation for our suffering. We know our suffering has no meaning. Mortals don’t live for long, so they never have to face what we kytaen have to: reality, hopelessness. We live, we suffer, and we have no means of escape. That’s all there is to it. So why do you think we resign ourselves to being thoughtless, heartless creatures? Because in that despair we can hide away from the truth that there is no meaning for anything. That we are alone. That we have nothing to believe in.’
Flurries of snow drift past us, and the branches creak as the wind frustrates them. I stare at him, wide-eyed. He breathes heavily, then grunts and turns away from me. It’s silent after that; even the wind quietens down as if watching Korren. Pain and anguish, the loss of hope, the loss of life. It’s all reflected in his eyes, in his words, as if his soul is peeking out and staring at me. I could never touch that kind of pain, unfathomable and dark and despairing, and I have the feeling that if I were soul-bound to him right now, I would be crushed by the weight of his misery.