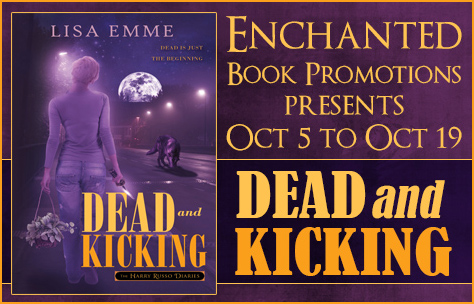 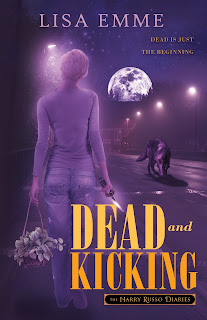 About the Book
Title: Dead and Kicking
Author: Lisa Emme
Genre: Urban Fantasy
What’s a girl to do when her date is D.O.A?
Angharad ‘Harry’ Russo is just your ordinary twenty-something, with one exception - she’s a witch with an out of the ordinary gift. When her blind date goes sideways and she ends up face to face with a dead body, her life starts to go sideways too.
Harry soon finds herself right in the middle of the mayhem, dealing with Cian Nash, a homicide detective that is as aggravating as he is sexy; the biggest, baddest vampire in town; and a parcel of pesky zombies that keep popping up everywhere. It’s all connected to her date’s unfortunate demise, or is there more to it than meets the eye? 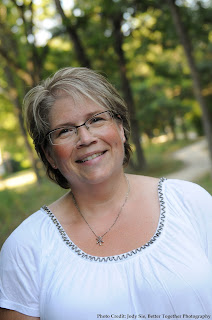 Author Bio
Lisa Emme is a Canadian who proudly ends her ABC’s with ‘zed’. A self-professed book-a-holic, she has spent the last few years trying to stem her book hoarding tendencies by writing her own stories and by avoiding the bargain table at the bookstore like the plague.
A bit of a thrill seeker, Lisa has tried such death defying activities as bungy jumping off a bridge and rappelling down the side of a 17 storey building. She's also single-handedly raising a teenager.
Lisa has worked as a veterinary assistant, playground instructor, bank teller, store clerk, waitress, telephone solicitor, research writer for an environmental think tank, computer programmer, and systems analyst. Her passion however, is writing. What else is she going to do during the long, cold prairie winter?
Lisa would love to hear from you. You can find her here:
www.lisaemme.com
www.facebook.com/LisaEmmeBooks
Links
Amazon: http://www.amazon.com/Dead-Kicking-Harry-Russo-Diaries-ebook/dp/B0142YLFOY/
Kobo Books: https://store.kobobooks.com/en-CA/ebook/dead-and-kicking-3
B&N: http://www.barnesandnoble.com/w/dead-and-kicking-lisa-emme/1122541178?ean=2940152287370
iBooks: https://itunes.apple.com/us/book/id1031910211
Book Trailer
https://youtu.be/LimtpEGcHSE

…I crept as quietly as I could, but it was pretty much a given that I couldn’t hide from a vampire’s amped up hearing or sense of smell. When I reached the end of the wall dividing the hall and the kitchen, I started to peek around the corner only to be abruptly grabbed and thrown against the wall.
“Gaak!” I said. Hey, you try talking when a six foot goon with the strength of a vampire has his arm cross your windpipe.
Tomas had pinned my knife hand as well as my throat. He grinned at me smugly. I could see Salvador lounging unconcerned across the room. My vision began to blur from the lack of oxygen as I let my knees give out a little, shifting more of my weight onto his arm. Surprised, he loosened his grip enough that I was able to take a rasping breath. I quickly brought my knee up to his groin as hard as I could. It was satisfying to know that whatever he was, he still felt it when he got one in the ‘nads. Tomas let go of my arm and I slid down the wall. Unwilling to hope that a shot to the junk was enough to keep him down, I followed through with a quick punch to his throat. He fell to one knee and I sprang away…
Posted by Stormy Nights Reviewing & Bloggin' at Monday, October 19, 2015