Passion of a Witch & Giveaway 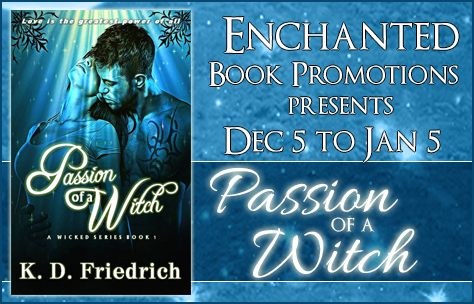 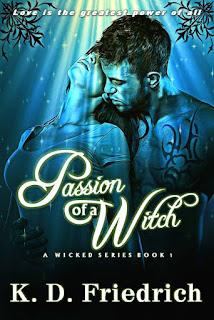 About the Book
Title: Passion of a Witch
Author: K.D. Friedrich
Genre: Paranormal Romance
In a few weeks, Summer Leery will be mated. For most witches, it's a time to celebrate, but Summer isn't smiling. Her upcoming union is one of convenience, not love, contracted between her family and one of the most powerful families in the coven. As always, Summer's loyalty remains with her kin and the traditions she's expected to follow. No matter how much she detests her future husband. With her parents off to secure her nuptials, Summer is eager to enjoy her last moments of freedom.

Kian Lancaster's relationship with his father is volatile. So finding himself at the bastard's mercy is the last place Kian wants to be. Unfortunately, he has no choice. His mother is suffering from an unknown illness and needs constant care. Care that costs money. Money Kian doesn't have. With little options, he lets his father pay his mother's mounting medical bills, knowing the offer comes with a heavy price. Kian must work for his father's ruthless company. Looking to forget his bleak future, he plans a nostalgic night of liquor and fun in the local woods. Unaware his destiny lurks in the shadows of towering pine.

Summer is shocked to find a human trespassing on her family's land. More surprising is that the Goddess to all witches demands Summer welcome the cursed intruder. Summer has no time to waste playing host to a foolish human. No matter how handsome. With her wedding weeks away, Kian's a temptation she can't afford to entertain. But when her deity makes a decree to bring the male into the supernatural world... what's a witch to do?

Kian's about to find out. For the first time in his life, a woman didn't fall to her knees to please him. Summer's apathy shackled his lust and refused to let go. Kian knows he should stay away from Summer, but when it comes to this woman, he can't get enough.

Their attraction is instant, their desire intense. Two hearts forced together by the will of a Goddess. Is Summer strong enough to resist Kian's charm? Or will she risk it all to taste the power of love? 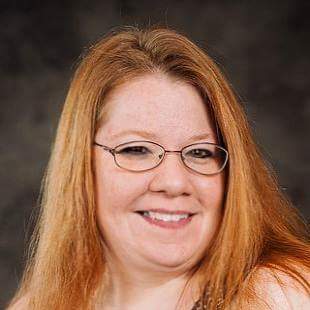 K. D. Friedrich is a writer of Contemporary and Paranormal Romance. A lifelong New Yorker, an overprotective mother (her daughter's words), and an obsessed reader of everything romance. Most days, you can find her hard at work, creating intricate worlds and compelling characters, hot alpha heroes being her favorite. Her novel, Soul Tie Seduction, placed second in the 2013 Golden Palm contest for Paranormal Romance and was a finalist in the 2016 Golden Quill for Paranormal Romance.

Giveaway
Win a $10 Amazon gift card during the tour.

Excerpt #1
Lust simmered in his veins at the memories of dodging her displeasure, one shot after another. It was the first time in his life he fought to keep his confidence. She threw him off the pedestal every woman had propped him on since… well, since his birth. One of her hard, green-eyed glares and he fell, tumbled from his perch to land at her feet. When he gained his composure, she did the most unexpected thing. She helped him. Even after the attack on her home and his lack of respect, she offered him what he didn't deserve, her charity.
He closed his eyes, imagining the softness of her dainty hands while her fingertips traced his leg with unhurried curiosity. He knew she meant nothing sexual in her touch. She had inspected his ankle, appraising the damage in a clinical manner.
Well, until she noticed his erection. If he lived to be a thousand years old, he'd never forget the innocence in her eyes and the sweet, sexy blush staining her cheeks. She appeared mesmerized and mortified at the same time. Experienced lovers didn't eye a hard-on with shock. They smirked with interest. No amount of foolish fantasies would erase the obvious fact that Summer was a virgin.
Kian had to back off. Deflowering virgins never fit into his game. He wasn't a gentle lover. He liked to dominate, and he liked to play. He needed his women to have the same feral desires.
He figured her obvious lack of experience would turn him off. Not a chance. Her purity screamed to his dominant nature, dared him with a beautiful enticement he could not resist.
The idea of knowing he was the only man who touched her excited him.