A Killer’s Grace
by Ronald Chapman and

My Name is Wonder
by Ronald Chapman 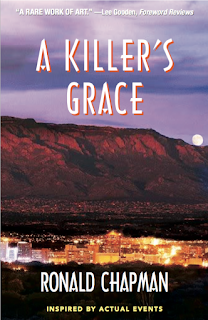 From the high desert of New Mexico comes a tale of mystery, murder and redemption. When journalist Kevin Pitcairn receives a disturbing letter from a serial killer, he is drawn into a compelling journey with profound psychological and spiritual implications, not just for the murderer, but for himself and society as a whole. As he tries to investigate and then tell the story, he finds himself battling his own inner demons and sordid history. Events conspire to propel an isolated matter to a national stage and audiences that are increasingly hostile. Forced to explore the roots of human psychology and sanity, Pitcairn must navigate moral and philosophical realms. What is the nature of evil? What powers of choice do humans actually possess? How may we be redeemed? And in the end, how do we reconcile with ourselves? 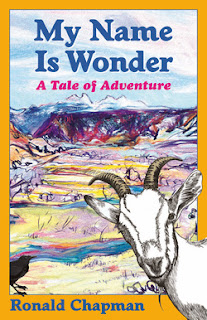 MY NAME IS WONDER Blurb:

My Name is Wonder chronicles the transcendent adventures of a little goat with big dreams. Join Wonder and his wisecracking guide, the mysterious crow Mac Craack, on a journey through the scenic landscapes of the American Southwest and into the heart of a mindful presence. Along the way, you’ll meet an unforgettable cast of creatures, each with an important lesson to teach.

“You were up even earlier than usual, Cito,” she whispered with the Spanish lilt so common to New Mexican Hispanics. “The nightmare again?” she asked.

The irony of the nickname was not lost on him. Kevincito, Cito for short. Little Kevin. Pitcairn shook his head in response. “No, it was the letter. My instincts tell me to check

it out. It’s a great story but I don’t really know what Davidson wants. And for reasons I can’t explain, I’m reticent.”

Maria Elena’s eyes blazed in response. “Why are you interested in that bastard at all? He deserves what he’s going to get!” To emphasize the point, she mimicked his impending execution with a full body spasm simulating the electricity coursing through him. Her glare locked onto his eyes before she spun on her heels to flip the eggs and stir the carne adovada.

Her infrequent bouts of steeliness always threw him off balance. He had learned to use the instant of quiet that followed to think before proceeding, and to swallow his tendency to react. It was simply a part of her capricious emotions.

“Emmy,” he began with her nickname, a playful variation on her initials, “if what Davidson writes is true, he’s not an evil man. And that’s a story that needs to be told.”

My Name is Wonder:

Consciousness returned in ebbs and flows. Wonder was first aware of darkness. Was it nighttime already? When his awareness next stirred, he felt a blanket of straw beneath a body that still felt sluggish and numb. He heard vaguely the subtle sounds of other creatures around him. He tried to lift himself to look around but could not.

An otherworldly vision came to him then. Oren looked down upon him. There was a twinkle in the old goat’s yellow eyes as he spoke without the movement of his mouth. “My dear Wonder, this is most certainly an interesting detour. Remember, there is no path that is not in the Light. The secret is in what you do with the path that finds you.”

The vision slipped away as Wonder again lost consciousness.

The next thing he knew, the darkness had grayed into morning and his head felt like a hollowed-out gourd. As he rolled up, he found he was able to stand, albeit awkwardly. Staggering around like a newborn kid, he surveyed his surroundings. He was in an old, barnlike structure, filled with bales of hay and an odd collection of creatures large and small including a dozen or more goats.

From the rafters, he heard a familiar croak. “Wonder wondering?”

He looked up to find Mac Craack peering down at him. The bird was a welcome sight in this strange place.

“Where am I?” he asked, his voice slurred so that the words all ran together. Wonder shook his head to clear it, and as he did so, he discovered that something metal had been clipped into his right ear. He turned in a tight half circle, trying to see what the jangling thing was. 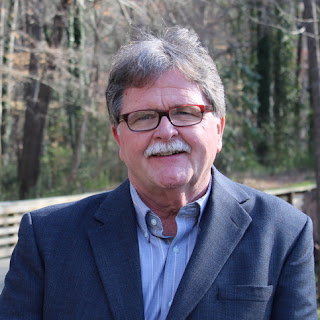 Ronald Chapman is owner of an international speaking and consulting company, Magnetic North LLC. In addition to international accreditation as a speaker and national awards for radio commentary, he is the author of two novels, My Name is Wonder (Terra Nova Publishing, 2016) and A Killer's Grace (Terra Nova Publishing, 2016 and 2012), two works of non-fiction, Seeing True: Ninety Contemplations in Ninety Days (Ozark Mountain Publishing, 2008) and What a Wonderful World: Seeing Through New Eyes (Page Free Publishing, 2004) and the producer of three audio sets, Seeing True: The Way of Spirit (Ozark Mountain Publishing, 2016, 2005), Breathing, Releasing and Breaking Through: Practices for Seeing True (Ozark Mountain Publishing, 2015), and Seeing True – The Way of Success in Leadership (Magnetic North Audio, 2005). Ron provides a wide array of social media content at www.SeeingTrue.com,
content for people in substance abuse recovery at www.ProgressiveRecovery.org, and other content from his master site, www.RonaldChapman.com. He holds a Masters in Social Welfare from The University at Albany (New York.) Prior to his relocation to Atlanta, Georgia in 2008, he was a long-time resident of Albuquerque, New Mexico.

Note: A Killer’s Grace is one of two novels by Chapman being released simultaneously by Terra Nova Publishing, the other being My Name is Wonder. The publisher commented, ““It is remarkable that these two books can be so very different but somehow speak to the same messages.”

http://www.RonaldChapman.com/ for other information from the author.

http://www.ProgressiveRecovery.com/ for materials relevant to those in recovery from substance abuse.

Note: My Name is Wonder is one of two novels by Chapman being released simultaneously by Terra Nova Publishing, the other being A Killer’s Grace. The publisher commented, ““It is remarkable that these two books can be so very different but somehow speak to the same messages.”

“…a book for the ages, with profound truths simply stated. First there was Jonathan Livingston Seagull and then Yoda—Now there is Wonder…”
-Beverly Molander, Minister and Radio Host of Activating the Power of Yes

“…an exploration of human nature and into the allegorical realm that shows us how to be wise teachers and guides…”
-Paula Renaye, Author of Living the Life You Love

“Clarity is an aspect of love, it is seeing clearly. Ron Chapman sees with those eyes. He pays attention as few do to the miracles around us.”
-Stephen Levine, Author and Teacher