From Fake to Forever
by Jennifer Shirk 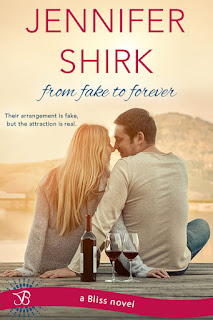 Sandra Moyer’s preschool is struggling, so she reluctantly agrees to let super-famous actor Ben Capshaw research a role there. Ben’s always joking around, never serious, but there’s something about the buttoned-up, beautiful Sandra and her young daughter that makes him want to take life more seriously. But Sandra won’t trust him—what if it’s all an act, research for the role? As the lines between make-believe and reality blur, Ben will have to decide if love is worth casting aside the role of his life for a new role…that could last a lifetime.

Ben Capshaw lowered his throwing arm and glared at his agent’s son, Todd. “Will you stop calling me that?”

“But you are my uncle Bens,” Todd said with a frown.

“Yeah, I guess. But when you say it like that I feel like a side dish at a Chinese restaurant.”

The boy snickered. “I know.”

Ben quickly raised the football again and pretended to whip it at him. When Todd flailed his arms and ducked, Ben had his revenge. “Nice move,” he called out with a laugh.

Ben lobbed the football in the air and watched with budding disappointment as it sailed right through Todd’s arms and bounced on the ground. Ben shook his head. The kid obviously needed more practice. “You almost had it,” he lied.

Todd picked up the ball and ran it back to him. “You know, I’m so glad you’re coming for dinner, Uncle Bens. Are you and my mom sure I can’t tell anyone you’re here?”

Ben looked up at the sky and sighed. A sigh that clearly said, if we go through this one more time I’m going to find your entire stash of Twinkies and eat them all without remorse. If the kid were a little older, he’d understand that threat and let the question lie. Instead, Todd continued to gaze up at him with big, hopeful brown eyes.

“Look, it’s like I told you before, I don’t want the paparazzi buzzing around here. I’m officially on vacation.”

“Hey, the beach here is just as good as Los Angeles, and after a few days I’ll drive up to New York City.” He loved New York in September. He’d get a haircut and a shave, a massage, meet a few women.

Ben’s gaze lingered again on the tasty-looking blonde sitting on the bench. He’d been checking her out since he and Todd first arrived at the park. Couldn’t help himself. He had a real thing for blondes, and most—thank you, God—had a real thing for him.

“Hey, Todd, why don’t we go to the slide over there?” Closer to that blonde.

He turned to the boy in surprise. “Why not?”

“That slide’s for babies.”

“No, it’s not. Look, there’s an adult over there,” he said, pointing the football toward the bench.

Todd looked over and made a face. “You want to go talk to that woman, don’t you?”

“Wh-what?” Ben spluttered. “No, no. No way. Hey, stop listening to your mom about me.” Besides, he didn’t want to talk to her, anyway. “Flirt” was a better verb choice. He wanted to flirt with that woman. There was a difference. Anyone could spew out words and just talk. Flirting required talent, always used with the sole purpose of letting the other person know you’re interested. And he was very interested in her.

However, as much as he was tempted to go over and introduce himself, he wouldn’t. He didn’t want to risk his anonymity. But he didn’t see the harm in getting a better look at an attractive woman. After all, if he was in a museum, he’d certainly want to get closer to a work of art, wouldn’t he? And from what he could tell, that woman was a bona fide masterpiece.

She had the kind of straight, shiny blond hair his fingers itched to feel and run through, and a body that was slender in an athletic kind of way—built more like a runner than a centerfold—and not at all fake like most of the women in L.A. He was positive there was nothing cosmetically enhanced on her. Not that she wore anything revealing to bring that kind of attention to herself. Yet, dressed in sweatpants and a Red Sox T-shirt, she’d managed to get his attention just the same.

“Um, Todd, are you sure you don’t want to go over there?” he asked again, trying to rein in and saddle his raging testosterone.

Todd took off running. “You have to catch me first,” he called out with a laugh.

That little bugger. Ben dropped the football and ran after him. Todd was fast, weaving his way around the wooden maze of forts and playground equipment and then disappearing from his sight. Ben climbed up the rope to the wooden platform and scanned the area. From the corner of his eye, he caught sight of Todd ducking into a tube slide. Ha! Gotcha now, kid. He ran over and climbed into a slide himself, hoping to catch him by surprise.

The only problem was he didn’t slide down.

He began to twist, realizing his shoulders were wedged in tight. With one arm pinned down and the other arm up, he tried shifting his hips to wiggle back up. That didn’t work, either. Okay, he wasn’t sure how he’d managed this strange, bizarre feat, but he needed some help.

Crap. He could see the headline now: “Career Not Only Thing Going Down Tubes.” Oh, man, his agent and publicist would have his head on a platter if that happened. He’d be lucky to get local theater work after that. Served him right for showing off and acting like a ten-year-old instead of the thirty-four-year-old he was.

Where the hell is Todd?

Ben heard movement above him. Thank goodness. He looked up, ready to ream Todd out for leaving him hanging so long. But he clamped his lips shut when he stared directly into the face of a cherubic little girl instead.

“Excuse me. Now it my turn,” she said in a tiny voice.

She frowned. “But I said excuse me.”

Her little face puckered and those big blue eyes filled with tears, which set the alarm bells ringing. No, no, please. I beg you! Oh, man, the kid was going to cry on him.

Where the hell is Todd!

The little girl did begin to cry—not with the loud, obnoxious wailing he half expected, but with a quiet, trembling frown and dime-size tears that fell like an H5 hailstorm. It made him want to break down and cry, too. He didn’t need this right now—stuck as he was—especially since he had no clue how to convey he was telling the truth to such a young child. About to send out a verbal SOS to Todd, he saw the blonde from the bench spring out before him.

Thank you, God. Maybe it wasn’t exactly how he wanted to meet this woman, but at least she would understand the situation, and he could finally get some help. But when he gazed up into the woman’s ready-to-kill eyes, he doubted very much that the cavalry had arrived.

“What did you do to my daughter?” she accused in that stern mother-cub-protecting-her-baby voice.

Oh, great. Her daughter. More bad PR. Now they were going to add child abuse to the headline. “Nothing,” he insisted. “Honest. Look, she just wants to go down the slide.”

The blonde folded her arms. “Well, let her, then.”

The woman’s demand gave him pause. Okay, she obviously didn’t understand his predicament any better than her kid had. “I…uh…can’t,” he said with a sheepish grin. “I’m kind of stuck. Maybe a little help?” He waved his one free arm, but she looked at it as though it were covered with warts.

“Maybe I should call the police for help instead,” she said, drawing her daughter to her side.

The woman flinched from his outburst. He didn’t mean to freak out on her, but the police equaled the press in his book. Then bad headlines. Then unhappy agent. Then less work. The list went on.

He cleared his throat. “No police, please,” he repeated more calmly. “In fact, don’t call anyone.”

An odd expression—somewhere between nausea and hysteria—crossed her pretty features, and she grabbed her daughter’s hand. “Let’s go.”

Go? Go where? He watched in disbelief as the woman began to lead her daughter away. Did she think he was faking it? Didn’t she recognize him? The woman was actually turning her back on him. 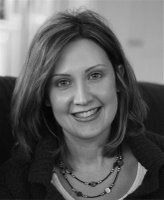 Jennifer Shirk has a bachelor degree in pharmacy-which has in NO WAY at all helped her with her writing career. But she likes to point it out, since it shows romantic-at-hearts come in all shapes, sizes, and mind-numbing educations.

She writes sweet (and sometimes even funny) romances for Samhain Publishing, Avalon Books/Montlake Romance and now Entangled Publishing. She won third place in the RWA 2006 NYC's Kathryn Hayes Love and Laughter Contest with her first book, THE ROLE OF A LIFETIME. Recently, her novel SUNNY DAYS FOR SAM won the 2013 Golden Quill Published Authors Contest for Best Traditional Romance.

Lately she's been on a serious exercise kick. But don't hold that against her.