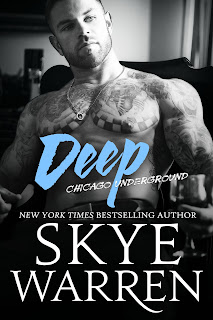 Philip Murphy has all of Chicago under his thumb. Except me.

We met in a perfect storm of violence and lust. He saved me and then disappeared from my life. Now I pretend I never knew that kind of darkness. I focus on midterms and campus parties, as if they can wipe the slate clean.

Then he turns up outside my dorm room--wounded and barely conscious. He's the head of a criminal empire, a powerful man, but he needs me now. There are traitors in his midst.

I can help him, but I can't fall for him.

“I’ll do it,” I threatened, holding up my fist. But I was mostly stalling for time. I didn’t think I could hit him. I wasn’t sure it would even hurt him if I did.

“Go ahead.” He glanced out the window beside me. “We’re almost there. The offer expires in three…two…”

The truth was he deserved worse than a punch for ruining my life. It wasn’t the classes I would miss most or the date with Sloan. It was the chance at a normal life. A chance to have a family. There were strands I’d been braiding my whole life, and he had come along to cut them.

Of course I wasn’t sure I could actually punch him, even if he deserved it. Not without him physically threatening me. Back then, when those men had come for me, I’d fought them. I’d even hit Shelly, pumped up on adrenaline and terror.

If someone was attacking me, I would have fought back. But hitting someone who was just sitting there? Hitting Philip? I couldn’t, no matter how much he deserved it.

That startled a laugh out of him. “What?”

He sighed. “You know this is ridiculous, right?”

“How is it ridiculous?” To my underwater brain, this made the most sense of anything. “You know you deserve it. And if I were more…you know, bloodthirsty…I would have already done it. This is just…just enabling me.”

One second he was sitting there regarding me with bemusement. The next he launched himself across the seat, his large body moving with surprising grace. I hadn’t taken into account how fast he could move. Of course he’d been strong. He could have overpowered me in a second. But he also moved like a goddamn panther, wrapping his hands around my wrists before I could blink. I didn’t even have time to pull my arm back, much less punch.

Instead he had my hands pressed against the side of the car, his body looming over mine, his hips between mine. His face was only inches away from me, gaze trained on my mouth.

“Not fair.” My voice was breathless. A spark of heat between my legs reminded me that while my brain might have been mad at him and my heart might have felt conflicted, my body was one hundred percent on his team.

“Oh, I think it was completely fair. You wanted me to come at you. And that’s what I did. So hit me.”

I yanked my wrists, but he held strong. His eyes flared with arousal at watching me struggle. Oh God. I couldn’t deny I felt it too, the clench of delicious surrender. He was holding me down, and I loved it.

“No, kitten. I’m just doing what you asked.” His lips brushed a millimeter from mine. “Enabling you.” The warmth of his breath was the only warning before he kissed me, fever-hot lips pressed against mine, his arms like iron bars around me. I melted into the seat, into the car—and against his body in the places we touched. My hips rocked against his, and he groaned into my mouth.

Only then did I realize the car had stopped moving.

“One,” he said softly, his eyes almost sympathetic. “Time’s up.”

Skye Warren is the New York Times bestselling author of dark romance such as Wanderlust and Prisoner. Praised as a “true mistress of dark erotica”, her books have been featured in Jezebel, Buzzfeed, USA Today Happily Ever After, Glamour, and Elle Magazine. She makes her home in Texas with her loving family, four dogs, and one evil cat.
Website: http://www.skyewarren.com
Facebook: https://www.facebook.com/skyewarren
Instagram: https://www.instagram.com/skyewarrenbooks
Twitter: https://twitter.com/skye_warren

And you can purchase Deep in PRINT...
http://amzn.to/1Tz3fvF
Posted by Stormy Nights Reviewing & Bloggin' at Thursday, April 07, 2016