LIFE ON BASE: QUANTICO CAVE & Giveaway

Life On Base: Quantico Cave
by Tom and Nancy Wise 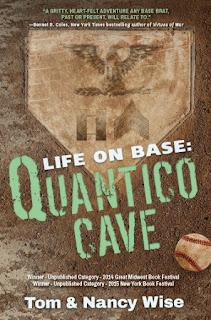 For Stephen, his life on base is much the same as most other children’s. The difference is in the details. Look both ways before crossing a tank path and be sure to check if the spent bullet casings you find in the long-abandoned trenches are actually empty. Sports stop at the sound of the evening trumpet call as he and his friends stand at attention while the flag is retired. Quantico Cave is a story of friendship and competition, and when Stephen meets up with a friend he once knew at a previous home station, the contest hits a whole new level that places everyone at risk.

Stephen had noticed Jimmy was a lot happier these days. “Keep an eye on the target,” he told him as he followed at a brisk pace down the heavily wooded hill. “Hear from yer dad yet?” He avoided Jimmy’s eyes, not wanting to see the hurt that might come with the answer.

“No,” Jimmy said and offered nothing more.

His head down, Stephen muttered, “It’s only been a few weeks,” knowing Jimmy would change the subject again.

Things tended to get quiet at home when Jimmy's dad shipped out with the fleet. The deployment meant less stress for Jimmy since his relationship with his father was normally pretty contentious. When a parent was mobilized, the rules were laxer, so little things changed. Kids would let their hair grow longer, stay up a bit later. For Jimmy, not having Dad around meant more free time on weekends—and less fighting.

“Miss him?” Stephen asked quietly with a glance behind to see the shadow trailing along the ridge to their left.

Jimmy ducked beneath an arch of tangled brush where deer had pushed through, keeping his eye on their target to maintain their line of travel toward the checkpoint. “Drop it.”

“Okay.” Stephen crouched in behind. “This is north—” he added, touching the damp, mossy side of a tree.

“We should stash some of the spears we made in here.”

We need to make up some time. “What we should do is go about fifty yards, then down the slope.” Stephen pushed Jimmy forward as they emerged from the brush. “C’mon,” he said, tired of the distractions.

The boys trotted the next fifty yards, or “klicks” as they liked to call them, then turned down a steep slope to make up time. “Shoot.” Jimmy let out a yelp as his feet skidded on the loose dirt and leaves.

Looking over his shoulder as he bounced down the hill, Stephen allowed himself to slide until his feet grabbed the dirt and then hopped again to keep his momentum. “Turn sideways. Watch.” He dug into the slope with each hop, doing as his dad had showed him. He heard Jimmy yelp again. I hope he sees this. I’m doing it the way you showed me, Dad. The next hop was cut short as Jimmy slipped, kicked his feet up as he landed hard on his butt, and slammed into Stephen’s leg. Both boys smashed into the soft earth and tumbled down the hill.

Stephen slid, his back to Jimmy’s chest, for another five feet before he got his sneakers planted to stop their descent. “Shit, Jimmy,” he said over his friend’s moans. Oh, my gosh. We need to move. Calm. Stay calm. Stephen glanced up the hill to see if they were being watched.

“Oh, man.” Jimmy groaned, trying to get his feet under him, but sending them another three feet down the slope.

“Put your feet sideways.” Stephen inched his way forward to give Jimmy some room.

Jimmy rose sideways to the hill, stood, shook the dirt out of his shirt. Cautiously, he hopped his way down the remaining incline ahead of Stephen, his feet breaking loose on each hop as he got the rhythm. When they reached the base, Jimmy dropped to his butt and crossed his arms over his knees in a huff. He stared straight ahead, not saying a word, as if searching for something.


Was pretty impressed with this book.  Wasn't sure in the beginning how I would feel or if I would even finish it.  The story flows real smooth.  You don't miss a beat and you don't feel bounced around.  The story line is remarkable as it sure hit close to home in my childhood.   I do believe that I have found another author that I will be returning to for more future reads!

Tom and Nancy Wise are award-winning authors. Their first novel, The Borealis Genome, is the grand- prize winner of the Chanticleer Book Reviews Dante Rossetti 2013 Award for YA Novels and Award Lab Lit Category. Thomas grew up in a military family moving from base to base as the child of a Marine, living the life of an officer's brat in times of war while Nancy was raised the youngest child of a WWII veteran. When not working together on their novels, Tom teaches at University and authors articles on project management topics and nonfiction books published by Gower Publishing in the UK.

Tom and Nancy Wise will be awarding a $20 Amazon/BN GC
a Rafflecopter giveaway
Posted by Stormy Nights Reviewing & Bloggin' at Tuesday, March 15, 2016