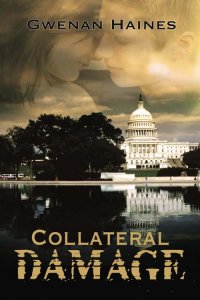 For three years Laura Drake has watched Senator Pete Worthington promote a series of gorgeous women while she sits in a forgotten corner answering constituent letters on an outdated computer. When Worthington asks her to find an elusive file one Friday night he sets off a series of events that brands her as a killer and puts her life in jeopardy. The path she sets out on forces her to confront not only the nature of evil but the ghosts from her past that have never been set to rest.FBI Agent Dalton Ross transferred from Chicago to Washington to escape his own ghosts. When his investigation leads him to Laura he's torn between his desire to keep her safe and the need to protect his own heart. As the mystery that surrounds them deepens, Laura and Dalton race to save themselves and the nation from someone willing to sacrifice anything to protect a secret.

He slid onto the barstool next to hers. From the way the man who had been sitting there had gotten up she wondered if he’d slipped him some cash. Though, to be fair, she hadn’t actually seen him do it…

His eyes locked onto hers. “You don’t sound too sure about that.” What was it about him that made her pulse quicken? Was it “sexual chemistry,” a phrase Zoe always used when explaining her latest one-night stand? Or fear, an emotion even more basic—and more dangerous. “I am meeting someone,” she said quickly. “Or I was.”

Before she could answer the bartender appeared and set down two pints of beer in front of them. Her companion paid, sliding the lighter pint toward her. “I’m Dalton Ross, by the way. And you would be—”

“Well, Laura,” he said after a slight pause, “I hope you don’t mind Pilsner. Didn’t figure you for a Guinness girl.” He raised a glass of dark liquid to her and took a swig. “To new friends.”

Laura raised her own glass and took a tentative sip. “And to old ones, too.” Was it her imagination or did his eyes visibly darken? Before she could decide, he was again the charming redhead hitting on her in a crowded bar.

Drama at it's finest!  Page turning smoothly written novel.  The plot behind this covers thickens over time...  But what happens?  You can find out everything there is to know once you grab yourself a copy!  I'm telling ya...  You'll find yourself lost behind this cover.  Wrapped deep into the dramatic scenes and lives of the characters... 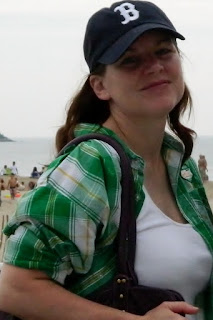 I live in an old Cape house with my daughter, too many books, and a red-and-white Siberian husky born on Halloween. After working in Washington, D.C. for several years and traveling to Russia, Europe and Pakistan, I moved back to New England. I’m the author of the romantic suspense novel Vertigo, which is available as an E-book from Amazon Encore and in paperback from Wild Rose Press. Collateral Risk, the follow-up novel to Collateral Damage (which features Dalton’s boss Nick Doyle and scientist Mia Lindgren), is forthcoming from Wild Rose Press. When I’m not working on fiction, I write poetry, teach literature and am still trying to learn how to cook.