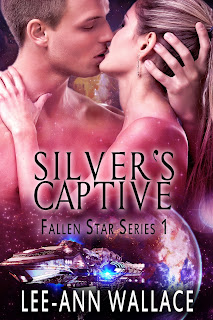 BLURB:
Determined to finish her studies and restart the search for her missing parents, Tarnee’s life is thrown into chaos when she is kidnapped by a silver eyed stranger. Held captive by the captain of a pirate ship, Tarnee finds herself drawn to him despite her need to get home.

Tor’Arr has been searching the universe for his one and only, the woman who will complete him and knows when their eyes clash across a busy space station that he has found her. He will allow nothing to stand in way of claiming her as his, not even his crew. Thrust into a dangerous world where she must rely on Tor’Arr to keep her safe Tarnee must decide if she’s prepared to give up her dreams to be with a man who can be anything she desires.

“Hottie at ten o’clock,” Angela said as I walked up to the waitress station.

The restaurant where I worked was already busy. Residents of the space station were stopping in for a meal on their way home from their shifts or others were looking for a bite to eat before heading to one of the entertainment venues.

I turned to look across the crowded expanse of the restaurant, amused by her description, to see a man sitting in my section looking back at me.

“Oh, space dust,” I hissed, as I whipped around.

The man was the same person I’d seen that afternoon as I’d walked my small cousin home from the education centre. He was a man who had stood apart from all the other people in the crowded promenade of the station. Our eyes had met, a fleeting glance causing my breath to catch in my throat, before his eyes had sought mine—silver eyes, a hot blatant stare that had sent my heart racing and my knees weakening. I’d felt trapped by that stare, held captive by it until my cousin had dragged me away.

“What? He’s gorgeous. You should be happy that he’s in your section. Maybe you’ll get lucky for once, Tarnee.”

“Yeah, right.” I wrapped a clean apron around my waist and tied it off.

Lee-Ann Wallace spends her days dreaming up sexy aliens to fill her stories with and drinking far to much coffee. She lives in a little house in Brisbane, Australia with her family and has set up shop at the dining table where she is surrounded by noise. When she’s not writing you can find her with her nose pressed to her phone reading a steamy romance.