A Wicked Desire
by Kiersten Fay 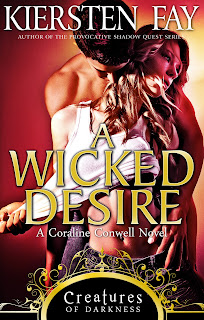 Having survived her terrible captivity by a sadistic doctor deep within an ancient mine, Cora returns home ready to move on with her life, but when Mason’s mysterious condition quickly deteriorates, Cora must embark on a quest for the one thing that could save his life.

When she is told Knox will accompany her, she fears she will not return alive. If Knox cannot control her, he might prefer her dead. Trusting him is a gamble she may never win…unless she can find other ways to tame the wild vampire.

Knox relaxed in the driver’s seat as he entered the highway.

She hadn’t asked nicely. She hadn’t asked at all. But then he hadn’t expected her to. Just the thought of being saddled with him as her escort had gotten her back up like he’d never seen. The disdain dripping from that last look before she had stomped upstairs to pack, grated. Why? Hell if he knew. He didn’t give a shit about what she thought of him. But it could have something to do with the fact that earlier she had been scanning him with open interest, with curiosity—maybe even with a little less fear and a little more respect than usual. Not that the former mattered much. Although, if he was going to get her in his bed, it might.

He had risked himself to help her. He should get points for that. Women loved that hero shit. Ate it up like motherfucking cake.

Unfortunately, he didn’t think she was allotting him the credit he deserved. Figures. His first selfless act in ages—well, mostly selfless—and she could only focus on the selfish part of it: that kiss.

He’d realized too late that she had manipulated him with that please-help-me-Knox and I-can-feel-your-fear garbage, and it drove him nuts that it had worked.

She’d scammed him. Got what she wanted without giving him a damn thing in return.

So he took a little something from her.

If she could really break through his blocks and see through the bond she wouldn’t have questioned the kiss…and even now she would be questioning his motives. Didn’t she wonder why he had capitulated so easily to joining her on this wild goose chase? The two of them, alone, for roughly eight days, no one to get in the way… 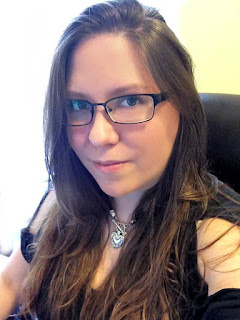 Kiersten Fay is the award-winning author of the steamy Shadow Quest series. She writes epic paranormal and sci-fi romance novels which incorporate elements of mythology and Lore. In 2012, Demon Retribution won Favorite Story of the Month via Gravetells, and received a nomination for favorite author in that same year. In 2013, her short story, Racing Hearts, was published in the anthology The Mammoth Book of Futuristic Romance. Her latest series, Creatures of Darkness, is a dark, yet steamy romance set in a future where vampires openly mingle with humans. Before becoming an author, Kiersten worked as graphic designer and now enjoys creating her own book covers.

In addition to the tour giveaway, please check for a special giveaway on the author's website:

Buy Links for A Wicked Desire