Desire to Fall
by Shona Husk 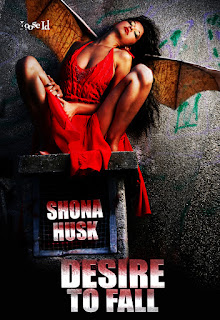 Kya Hawl is an architect on the Precinct One redevelopment, a prestigious and contentious project in the city-state of Velli. While she is happy with her part-time female lover, Judge Elmi Chadee, she wants more. She wants a family and children, for that she needs two men willing to put their life on the line to breed.
Tref Xant and his partner Dru Macon seem like the right guys; however, Tref has secrets and Dru is about to deploy to Precinct One, one of the roughest precincts in Velli. The redevelopment can’t come soon enough. Tref would like to see the placed burned to the ground. But even that wouldn’t be able to erase his memories of growing up there.
With Dru away Tref finds himself falling for Kya. Jealousy sparks between the men. A triad can never form as Dru wants Elmi and she has sworn off unions after her sister ran away to join the Terrin Sect.
As riots erupt and the redevelopment is threatened Dru realizes he has to fight for what he wants--something Tref learned long time ago. A four-way union--while unusual--would work. But will the women agree when they learn of Tref’s past?


People stood to go, and he started packing up. A flutter of wings caught his eye, and he lifted his head from his handheld prismi-screen. Kya was preparing to leave. Could he walk over without it being obvious? What exactly was he trying to achieve? He watched as her wings partially opened, and she stretched after being forced to sit and watch a talk on electrics and security grids. Dull for most people. Fascinating for him. Almost as fascinating as functioning wings.

For a heartbeat he was transfixed by Kya. Her golden skin was almost translucent between the bones of her wings. So fragile, yet able to soar. He curled his fingers. He’d love to run his fingertips over those fine bones. Kiss where her wings joined her back. He and Dru hadn’t shared a woman in a while. She was definitely Dru’s type. Lithe with full lips that were always turned up at the corners.

Longing surged, but he tamped it down. Dru might get the wrong idea and think he’d changed his mind.

Kya headed toward the door. She spoke to another person and smiled. Would she smile at him? Why did he care? He should just let her leave. He could, but he knew he’d end up telling Dru about her and then trying to explain why he hadn’t acted on the attraction and at least said hello. There was only one reason, and it always caused an argument. Children were the one sticking point between him and Dru—Dru wanted a family, a triad. Tref didn’t want that responsibility. He’d seen how hard it was to keep a family together. He was holding Dru back. Tref resisted the urge to touch his wedding ring. Dru had married him for a reason.
Fuck it. She won’t bite—yet.

Tref strode over to Kya. He could call it professional courtesy. Casual interest. Even if it was attraction, it didn’t mean anything, and it didn’t mean he had to say anything beyond hello.

Kya’s head turned as he approached, and she stopped walking, as if she was waiting for him. Her gaze raked over him, too slowly for it to be anything but an appraisal. The heat in her eyes almost made him take a step back. He could hear the warning in his heartbeat that he was going to get burned by this one, but he still extended his hand in greeting.

The backs of their hands touched, and it was enough to send a jolt through his nerves that sizzled. He hadn’t felt attraction this strong since he’d met Dru, all dark eyes and muscle wrapped in a cop’s uniform. That had been five years ago, and he’d never expected to feel it again.

“Glad to finally put a face to the name, Kya.”

“You too.” She smiled, her blue eyes as dark as midnight. Her gaze flicked from his face to the ring in his ear.

In that fraction of a heartbeat, he didn’t want her to think he was unavailable. He wanted her to know he was interested in getting to know more about her and introducing her to Dru. That would be fun. Unless she wasn’t into the straight-up, honest-to-the-button-type guy. That wasn’t Tref’s type either, but Dru was something else.

“I’m glad you stood up to the Razor.”

Tref forced a smile at the manager’s nickname. It wasn’t quite as funny after growing up in Industrial 13. “I knew it would be coming, but it’s better to ask for everything first and then offer a cut.” He paused. She had no rings in her ears. What sect was she? Famili or Poli? He wasn’t sure what to say next, yet he wasn’t ready for the conversation to be over, so he kept it neutral and safe. “You work in this building?”

She nodded. “Yeah, up two levels.”

Of course she was up a couple of levels. He could picture her flying onto the top of the building and walking down the stairs to her office while he climbed up the stairs to his. He swallowed. The room was now empty except for them. He had to do something or say good-bye and try again another time, but that wasn’t who he was. He usually grasped every chance that came his way. “If you ever want to get drinks after work, there’s a nice bar in Tower A.”

Dru would be so impressed that he’d managed to make that suggestion.

Kya tilted her head. “You don’t like the Yellow Hop?”

Three floors down, it was popular with the office staff. However, he’d much rather catch a gondola across to Tower A and have a bit more privacy. Besides, from Tower A it was another short ride to his apartment. “Too many people from work.”

“I’ll keep that in mind.” She gave him another smile, her gaze lingering on him. “See you soon, Tref.”

He watched her walk away, her wings semispreading before closing as if she really wanted to shake them out. He wanted to see them extended, arching over his lover. The thought hardened his cock instantly. If they met for drinks, he’d be able to find out a bit more about her. And her about him. That thought was enough to kill the heat in his blood. He didn’t like anyone knowing too much about him. They judged too quickly. Women knew he wasn’t mating material once he mentioned growing up in Industrial 13, soon to be the cheap and trendy P1.

With a grimace, he turned away and packed up. It would be better if she didn’t take him up on the offer of after-work drinks.

Shona Husk lives in Western Australia at the edge of the Indian Ocean. Blessed with a lively imagination she spent most of her childhood making up stories. As an adult she discovered romance novels and hasn’t looked back.

With over forty published stories, ranging from sensual to scorching, she writes contemporary, paranormal, fantasy and sci-fi romance.


Enter to win a $20 Amazon/BN GC - a Rafflecopter giveaway